A certain revival of old adventure game classics has begun. With the announcements of Day of The Tentacle, all that remains is Full Throttle.

Well, normally this would have been another philosophical rambling about some topic. But today, I felt the need to bother with the much recent and wonderfully successful Point and Click Jam. Of all the jams I watched closely or participated to this year, this one seemed to outpolish all of them. There were absolutely no amateur entries here. It felt like a bunch of veterans were against each other, fighting for the first spot. This may be a correct first impression, however upon closer inspection that is not exactly the case. The majority of the contestants, haven't even made an adventure game before (some I believe haven't even made a game!), so why does this not feel as amateur hour (pointing at the Pewdiepie VS Indie Jam)?

Because, there's no way to pull off certain genres with half-assed efforts. Which explains the duration of this … game-making competition and any other adventure game competition. Think about it! Even OROW (abbreviation stands for One Room One Week), that is about making an adventure game in one room/screen, lasts a week. For it is quite known and obvious to all developers, that you could make a platform game in a matter of hours, but as a genre, adventure games are focused on the story and atmosphere, and it's rather hard to set up pacing, flow, story arc, character design, interface, puzzles within the span of a day, let alone in a lesser time.

It's a genre that begs for lots of hours of work, but also for quality in their ranks. Arguably regardless of the design of your game, polishing it, is a vital element. For adventure games in particular, it works on every little part that they consist of, making it impervious and necessary to bother with. And here I am two paragraphs in, and I'm already transforming back to Plato.

It was organized by the good people down at GameJolt, and the rules were quite simple (and a bit on the annoying side too!). In 15 days you had to make an adventure game of the point and click kind, whereas the interface was left open for developers to either make ones that have already been famous from games of the era, or construct a new one. The resolution was forced to 320x200 so that you could get that "1991 feel" and you could work on your story before the jam begun (but just the story!). The ultra annoying bit for me, was the palette restriction. To make things more challenging and closer to the Lucas Arts / Sierra Era we all loved when we were growing up, the rules stated that you had to use a certain palette (a number of colors) to make your entry.

That was of course set to maintain a retro feel, along with the rule that also made clear that you're not allowed to make use of a technology further developed after 1992 or so (contemporary technologies in making the assets of your game had to be used). While, this helped created quality entries in a weird masochistic way, I found it rather unappealing. It should have at least broadened the restrictions by allowing the use of transparency, if not alpha channels on sprites.

Regardless I consider the jam to be highly successful, as through it wonderful games such as "A Fragment of Her", "Max Greene", "The Exciting Space Adventures of Greg And Linda", "Void And Meddler", "There Ain't No Sunshine", "A Cosmic Song" and others, spawned. I highly suggest checking all the entries, but these especially are worth it a tiny bit more. Wait, aren't adventure games dead? :P

4 Comments
By Pstonie on 2 Dec 2014 at 06:09
A far larger benefit of being male is apparently the ability to stand up for yourself in the least. Who's such a damsel in distress that they need a guy in a pink shirt to complain for them? Yah, guess why people aren't taking you seriously.
By Wes on 8 Dec 2014 at 12:09
How exactly is someone siting the examples of benefits they receive complaining for someone else?
By Pstonie on 9 Dec 2014 at 17:56
Exactly: A complaint is an appeal to another party with the intent of remedying a grievance. These guys were not citing sexist trivia to brag about it.

A better question is why -ists think that pretending not to understand the definition of a common word like complaint would make their adopted arguments seem more credible.
By Wes on 12 Dec 2014 at 06:09
Other films in this series:

Currently, I have to admit, I'm a bit swamped with work, cause we're planning a wonderful patch for Primordia", is what I wrote a week ago to save myself from writing last week's article. Though this means I just abused this web space for personal promotion, I promise I'm not going to reference the game on this article again. It's not even what the article is about, it's only but a spark. But, returning back to it, why would anyone bother with something released over 2 years ago? Doesn't that make you wonder? What are the reasonings behind it? Well, the answer is not logical in itself. But let's take things from the top.

In anime and manga any material added or adjusted to please the audience intentionally is clarified as Fan Service. In the weird cultural differences between the Western world and the Japanese, fan service could even mean about having a long shot of a woman's body and/or generally gratuitous nudity. But it's not just about that. Prolonged scenes, extra violence,… references to other shows are also deemed as fan service. But what is this term I've been throwing at your face actually about?

It is about servicing the fans, if you will, providing the audience with the premise that was initially hinted at or directly promised, or somewhere in the process deeply desired. For its about giving your fan base, regardless of size, what they want, to put it bluntly. As it has been said before, it could be fixing an annoying issue, fixing a crash, it could be adding content, adjusting previously existing content, it could be virtually anything.

What helps clarify it as such, is the fact that you've went out of your own way to provide a version of the product closer to the desires of the fans. A direct nod of appreciation, to show the bondage between you and the audience. Every remake of a game, every remastered version of it, despite being approved for profit reasons is also falling under the rule of servicing the fan base.

A big example of that, are the Neon Genesis Evangelion (Shin - Seiki Evangerion) movies. Categorized as a fan service because they are created to satisfy the fans desire for a better (perhaps alternative is a better word) ending to the series. It's even stated on last addition to the saga, Evangelion 3.33, You Can (Not) Redo, that the movies have been partly if not entirely for the fan's satisfaction, as they will continue till the fourth movie gets released. The original television series first airing almost two decades ago (October, 1995), ended rather philosophically and abruptly.

The finale itself, mostly abstract in its nature (containing concept drawings, unfinished sequences, real-life stills and voice-over dialogue), has being heavily criticized by critics and fans alike, who considered even the possibility that the ending was forced from budget cuts. Thus, the creators have embarked on a quest to satisfy the thirst of the fanbase (cult, would be more appropriate) for a proper closure.

Fan service is a weird kind of love, nobody gets it, except the parties involved. Then again we could rule it down to explicit sexual content, but that's not what it's about. It's not logical, it's not even always good for business, it's the opposite of value-per-time-spent, but it's a wonderful thing we do, a silly anniversary to form a wonderful relationship.

Golden Wake gets reviewed by some Swedish Magazine.

Translated by David Ostman, provided by the wonderful Lasca. 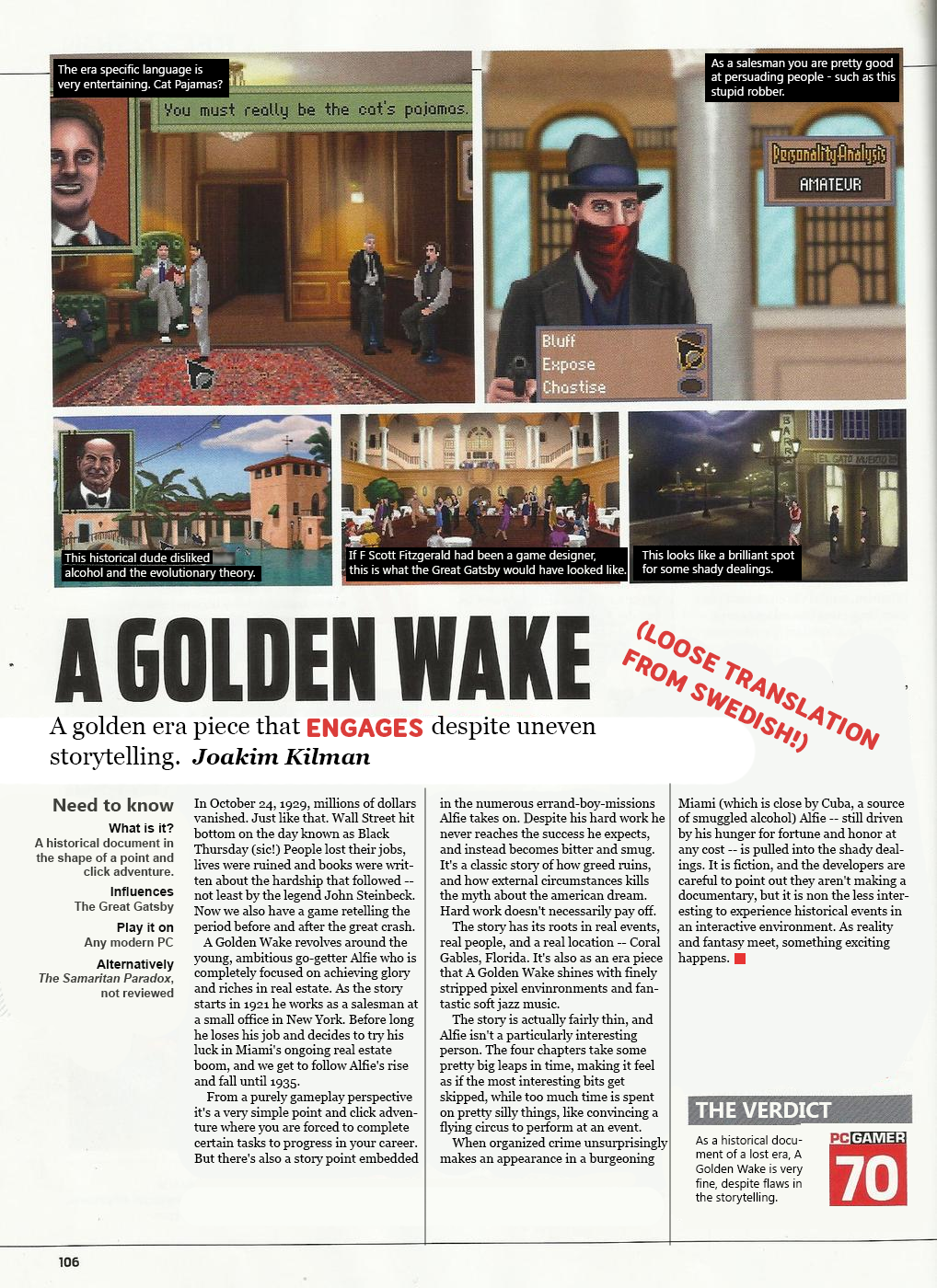 Don't play it safe, all of the time

Well, Ghost says it all. Stop not-taking risks, be a man. GROW THE BEARD OF MANLINESS, MAKE THAT DAMN GAME, SON!

Stop crying and be a MAN.

1 comment
By Pstonie on 2 Dec 2014 at 06:09
A far larger benefit of being male is apparently the ability to stand up for yourself in the least. Who's such a damsel in distress that they need a guy in a pink shirt to complain for them? Yah, guess why people aren't taking you seriously.

You know, I'll save the formalities, this an expo of sorts full of nice people from the AG crowd, conducted by Mark Lovegrove. It's amazing really, and it has begun to grow to a much bigger thing. Today's schedule includes Dave Gilbert, Theodor Waern and others. Sunday also looks out to be great (I've sent something bound to change history) There's also high chance there will be streaming of the event, so it will be nice to watch.

And there's that. Not sure if it was also seen on AdventureX, but here's a fantastic trailer of Nelly Cootalot